How Faith, Joy and Love Were Found in the Most Unlikely Place –

on the Side of the Road

Imagine you’re driving the back roads just outside old 31 Camp in Kenvir (Harlan County) one beautiful day in early November.  It’s such an unusually pleasant day, in fact, that you even have your windows down…

… when you come up on a blue pickup truck parked just off the road in a clearing.  There’s a grown man who looks to be in his 50s and a little gray-haired lady outside the truck holding hands and dancing!  As you drive past, you hear music, music that you recognize – it’s actually Elvis cranking out “All Shook Up!”

You’re not the only one slowing down to smile and wave to the dancing pair as you pass… but the couple doesn’t seem to notice.  It looks for all the world like they’re oblivious to everything but this magic moment they’re sharing.

In fact, you think to yourself, “I don’t think I’ve ever seen two people look happier!”  For ever how long that song went on, they seemed elevated to another world.

These two people?  Turns out it’s a very special lady named Della and her youngest son Mike.  I know them well, and I’d like to explain.

The day began like many others.  Mike made the trip from Knoxville to Harrogate to pick up his mother and take her out for the day to some of those favorite places of her past –

Places in and around Harlan County where she and her late husband Carl lived for close to 50 years – raising their family, enjoying the camaraderie of their coal camp neighbors, praying for the safety of their miners, sharing evenings with friends. If it was a weekend you’d likely find them all together, laughing and dancing well into the night.

Revisiting the cherished memories that still inhabit those hills brings her so much joy.  In fact, that’s her favorite thing to do these days.  So they do it a lot.  Why, Mike even compiled a playlist of some of her best-loved oldies from the ’40s and ‘50s to play for her while they ride.

Now, to this day, if you ask Della what she loves most (outside of the people in her life), she would say “good music and dancing.”  Always has.

In fact, decades ago she and her younger sister Dollie danced on the side of this same road a time or two.  They’d be going somewhere in the car, one of their favorites comes on the radio and nothing doing but Della would pull off the road and she and Dollie would go to jitterbugging!

So here she is, out with her youngest son on a beautiful early November day, less than a month shy of her 94th birthday, riding down the road with the CD player cranking out some vintage Elvis, clapping her hands, playing air piano on her blanketed lap, and singing along.  By the look on her face you’d think it was the best day of her life.

She turns to her son and, true to her nature, says:  “If it gets much better, you know we’re gonna have to get out and get this one!”  … reminding him again of how she and Dollie would do that very thing.

Mike actually considers it for a split second… then decides against it.  Why, she has a hard enough time now just walking.  To get my feeble little mother out of the truck on the side of the road just to dance would be an utterly foolish thing to do!

But the idea kept nudging him.  He couldn’t shake it.  So he finally gave in.

Finding a good level spot, one that had quite possibly welcomed two younger pairs of dancing feet many years earlier, he pulled safely off the road and jacked up the volume so they could hear it real good.  Getting the little black footstool out of the truck bed, he carefully helped her to the ground.

He took both her hands in his, and her feet answered immediately to the call of that familiar rhythm. Anyone watching may not have recognized the steps, but in her mind they were jitterbugging – just like it was 1950 all over again.  Pretty good for a 94-year-old with a bad right knee (from a poorly-healed surgery decades earlier).

Della never noticed the knee.  She was in heaven!  Laughing… dancing to the music in her soul… loving life!  Mike said he’ll never forget the look on her face – the sheer joy she experienced in that moment.  It was a priceless gift for her… and him. 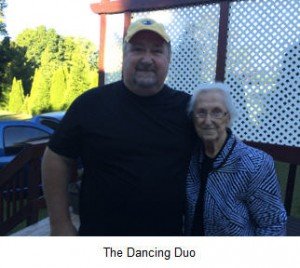 The doctor gave her up for dead when she was born… though God had a different plan in mind.

Growing up, she was a ‘daddy’s girl’ – but then she lost him to a tragic accident when she was only 12 years old.

Fast forward a bit, and she marries a coal miner who mined in the early to mid 1900s in Harlan County, Kentucky – when “bloody Harlan” earned its haunting reputation.  Like many other miners’ wives, she had her fair share of anxiety during those 28 years as coal mining was dangerous business in those days.  Then in 1997, after 58 years of marriage, Della lost Carl to heart failure, and she’s been a widow ever since.

She lost both her sisters to cancer, and in the spring of this year she, too, was diagnosed with this dreaded disease.  A malignant tumor the size of an orange was taken from her colon.

But to her doctor’s amazement she experienced an unbelievable recovery.  In fact, his astonished comment was something like… “I can’t get over this.  The healthiest person I have in the ICU is a 93-year-old woman who just had a malignant tumor removed!”

But this didn’t stop Della.  Oh no.  She didn’t skip a beat.

To the contrary, you see…

… you’ll find her on the side of the road next to a blue pickup truck dancing with her son, radiating her lively spirit and having the time of her life!

The power of this story has burned inside me ever since I first heard it, and I’m overwhelmed with gratitude that this magnificent little lady is in my life.

You see, Della is my mother-in-law… though I dropped the “in-law” part a long time ago.  She’s just “Mother.”

And the most amazing thing about her is how she makes living look so easy!

Best I can tell, a big part of her secret is that she knows how to have fun… she goes with what comes her way…

… and she knows how to LOVE like no one I’ve ever met.  (Maybe that’s her ace in the hole?)  In the 39 years I’ve known her I’ve never seen her hold a grudge – even when she had good reason to!

What happened on the side of the road that day immediately reminded me of a song I loved at first hearing titled “I Hope You Dance” (written by Mark Sanders and Tia Sillers).  In fact, the words are so fitting that, if I didn’t know better, I’d swear Mother was their inspiration for writing it!

My prayer is that this true story will inspire you as it has me.  That it will be a light in your own darkness – hope for your weary path – a breath of life when you need it most.

I hope you remember Della – and that, like her, you choose to dance!

And if it has brought a smile to your day, I hope you pass it on.  You never know who might need a little propping up today… and this might be the perfect propper-upper!

To hear “I Hope You Dance” by Lee Ann Womack, click below:

This site uses Akismet to reduce spam. Learn how your comment data is processed.