The tipple of Peabody’s #31 mine, where Dad mined. You can see this in the distance on the “You did what with them beans?!” page.

While not a mining artifact, I thought our readers might enjoy seeing this.

WHLN 1410 was the radio station when we lived in Harlan during my childhood. I remember it fondly. And though it was a tiny signal (5000 watts) – it was a big station in my mind’s eye! I might add that it was also the most powerful station in Southeast Kentucky, as noted on the knife itself.

If you are wondering about the “KC” designation, it stands for “kilo cycles.” This old designation has been replaced today with kHz, “kilo Hertz.”

WHLN still exists and is an ABC affiliate, I believe.

Dad got this WHLN pocket knife for me when I was about eight years old (1964). As I said, though not a mining artifact, I thought you might enjoy seeing it. Some of you might even remember this keepsake from long ago. 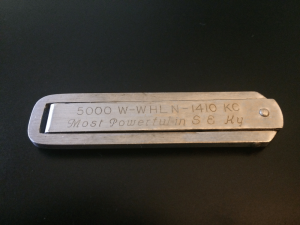 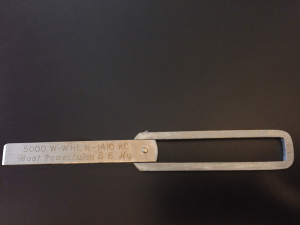 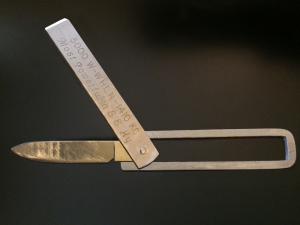 This is a picture of Dad’s personal anemometer – a device used to measure the speed of the wind flow inside the mine. It is essential to keep a good air flow inside of a mine for circulation and to carry out any volatile gases. Extremely large fans were used to carry out this important task. Carbide lights were used in the 30 and 31 Peabody mines in Black Mountain (Kenvir) until about 1940. Before this, miners wore a small metal lamp with a wick on the front of their canvas cap. The lamp was filled with either coal oil or kerosene. As hard as this is to believe, the companies actually charged them for the fuel.

Carbide lights consisted of two main components. On top was a water reservoir which screwed into a base containing the calcium carbide. Water dripped slowly into the carbide reservoir. When water and calcium carbide mix the gas acetylene is created.

Side view showing clip that slid into a bracket on the miner’s hat. Early hats were canvas and provided no protection at all. They simply provided a place for the miner to hang his light. 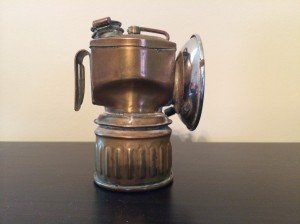 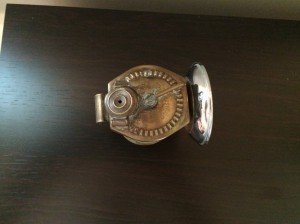 The two main components of a carbide light: water reservoir and illumination shield on the left and the calcium carbide reservoir on the right. 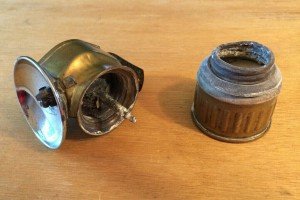 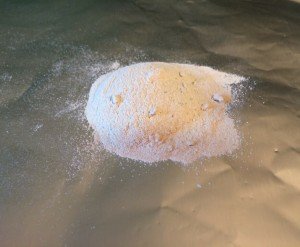